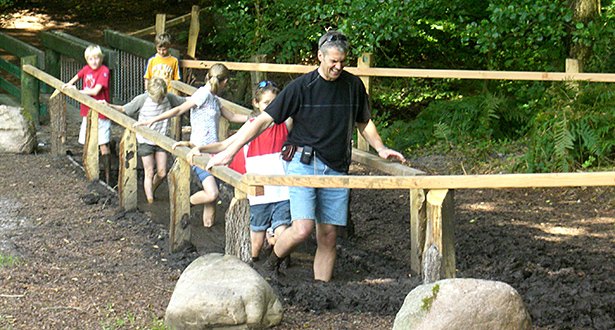 In Lüneburg Heath, there are a number of interesting museums that cover a wide range of topics for the visitor:

Around a central village square you will find typical houses and facilities. These buildings were saved from demolition and rebuilt here:

A well with a shadoof and a cultivated farm garden with useful native plants and ornamental plants complete the picture. The site is freely accessible. The buildings are open from 14:00 to 16:00 on the 1st and 3rd Sunday and from 15:00 to 17:00 on bakery days (on the third Saturday of each month) from April to September. Other visits on request.

Holmer water mill is located directly on the Seeve bridge. The foundation walls date back to the 16th century. Members of the History and Museums Association of Buchholz and the surrounding area have lovingly renovated since 1977. The grinder was renewed in 1981. Since then it has been put into operation on milling days (on the second Saturday of each month) and on German Mill Day. During these milling days the mill is open from 10:30 to 13:00 and can be visited. You can then buy flour and bread from organic grains. In the cosy fireplace lounge, visitors are also served with bread and dripping, herb bread and coffee or tea. On the upper floor of the mill, the association organizes lectures, concerts and art exhibitions at irregular intervals.

It all started more than 30 years ago for Hannelore Ernst with a couple of dolls at a flea market. In 1984 she decided to make her steadily growing collection accessible to a broader public and to set up the toy museum. Since that time, the museum has developed wonderfully. There are now three floors full of historical toys and creative playing facilities. The museum can be visited 365 days a year.

The German Tank Museum in Munster is the largest location of the German Army and for 25 years has been the destination for over 70,000 annual visitors who want a comprehensive insight into military history.

Around 7,500 m² of exhibition space portrays more than 100 years of German military history. The focus is on armoured troops. Not to be missed are the presentation of the history of the Munster site through uniforms, original Nissen huts and field houses.

The exhibition in the German Tank Museum aims to present the development of German armoured troops since 1916 to the present as part of a wider German history and to demonstrate its technical development. To emphasize this historical orientation, contemporary historical documentaries are presented with the military exhibits.

After the war, Bendestorfer Film Studios developed into the largest in the former western zone. From 1947 to today, nearly 100 full-length feature films and film series have been produced. All the big German actors and many from abroad have filmed in Bendestorf. Films such as "The Sinner" (with Hildegard Knef), "Ave Maria" (with Zarah Leander) and "Heideschulmeister Uwe Karsten" (with Claus Holm) came from here. The film museum shows the film technology of the early post-war years, such as cameras, studio lights, cutting tables and more. Posters, scenery, original screenplays and autographs of the actors complete the exhibition. In the video room more than 50 films shot in Bendestorf can be viewed (by prior registration). In addition, the museum provides the opportunity to view and cut 16-millimetre film material.

In Oldendorf (Luhe) Archaeological Museum you will find the majority of the discoveries from the nearby Oldendorfer Totenstatt burial mounds. In the exhibition "Homes for eternity – 5,700 years of Oldendorfer Totenstatt", visitors are given comprehensive information on the immigration of the first farmers and the construction of their burial sites in the Luhe valley. The museum also houses a number of the most important archaeological finds from the most important archaeological sites in the region, which are located here on permanent loan from Lüneburg Museum.

In the "Desk and Quill Museum" in Insel (Schneverdingen), a wealth of exhibits is presented in lovingly restored rooms. In the cabinets, shelves and showcases there is a collection which provides a good insight into school life in earlier times, with old school bags, works from the craft and handwork lessons, globes, school cones, certificates, workbooks, slate tables and other relics. Old furniture and everyday objects from early school life resurrect the classroom in the visitor's mind. Of course, the pen, the slate, the abacus and the cane are not missing. Schoolbooks and photos from the partner location of Insel/Altmark in the former GDR complete the collection. Pride of place is given to a stylish appreciation of the life of the Heath poet Marie Kupfer. Exhibition boards give information about the life and work of the Poet.

"Dat ole Huus" Heath Museum in Wilseder is one of the oldest farms in Lüneburg Heath nature reserve. It dates from 1513. It gives you a life-like impression of life and activity at a heathland farm around 1850. Its founder, Bernhard Dageförde - himself a child of the heather - collected many everyday items, furniture and tools from around the world as early as 1900, and in 1907 was able to set up the Heath Museum as one of Germany's first open-air museums. The Museum is open between May and October.