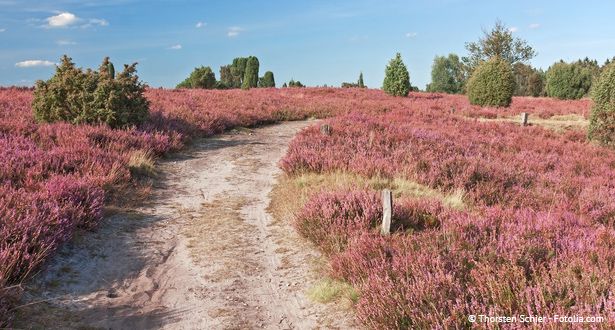 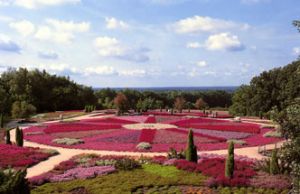 But when does the heathland blossom? Heather (Calluna vulgaris) blooms from August to September. The landscape is then dipped into a rich violet and develops its very special appeal. A rule of thumb says that the heather blossoms from 08.08 until 09.09.

But of course, the blossoming can also be earlier or later. The less widespread cross-leaved heather blooms as early as July. The intensity of the blossom depends on the weather conditions and can vary from year to year.

Heather flowering in winter too – the Heather Garden makes this possible

On the edge of the Schneverdingen is Höpen Landscape Protection Area and its much-visited heather garden. Set out in a circle there are than 130 varieties of heather and some 120,000 plants, allowing you to admire the variety of flowering heathers throughout the year. Directly adjacent is one of the Schneverdingen sheep pens, where the popular shepherd evenings regularly take place during the season, and where you can sample local specialties and Heidschnuck meat. Come and take a look sometime!