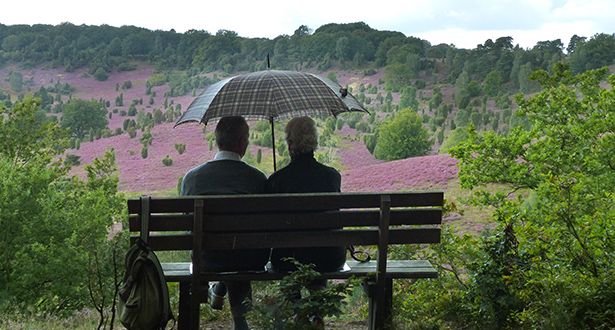 With over a hundred years of history, it can be helpful to recall the pioneering moments of the Nature Park since its inception. On our timeline, you will find the most important stations and events in this history combined with some background knowledge. Have fun browsing!

The Nature Conservation Park Association (VNP) is founded in Munich in 1909 and is committed to large-scale nature protection.

Following the example of the American national parks, the VNP wanted to protect important and representative natural areas in Central Europe - high mountains, uplands and lowlands - in areas of at least 20,000 hectares. In the high mountains, the Nature Conservation Park Association contributed significantly to the fact that the first national park in Austria was designated in the "Hohen Tauern". In the lowlands, it became active in 1910 with the acquisition of the areas around Wilseder Berg in Lüneburg Heath, after being persuaded by Pastor Bode to get involved in Lüneburg Heath. You can find out more about the VNP on the website of the Nature Conservation Park Association.

Wilhelm Bode (1860 - 1927) was Pastor in Egestorf from 1886 for 37 years. Early on he recognized the need to protect the unique historical cultural landscape. After long, arduous negotiations, he together with others succeeded in acquiring a site called Totengrund.

In 1909, he convinced the nature conservation park association in Munich to get involved in Lüneburg Heath in 1910, they bought Wilseder Berg. When, in 1921, an area of four square miles was declared a nature reserve by the Prussian government, in the middle of which was Wilseder Berg, his years of tireless work were crowned with success. As a special honour, a bust was made for him a few metres from Egestorf church.

The area around Wilseder Berg is declared a nature reserve by the Prussian government.

In January 1954, the Hamburg businessman and enthusiastic nature lover Alfred Toepfer (1884-1993) became chairman of the Nature Conservation Park Association. As the largest grain trader in the world at that time, Toepfer was one of the most prominent figures in the economy of western Germany.

Extensive travel took him through many countries of Europe, America and Asia. He supported the Nature Conservation Park with full vigour. In the formative years of the Federal Republic, Toepfer persistently pursued his goal for the preservation of the full beauty of the centre of Lüneburg Heath as a recreation area for the hard-working population, and to establish nature conservation ideas in all social circles. Toepfer's visions were rediscovering the recreational value of nature, and spending a work-free Sunday as a counterweight to a hard working-week, as stress-free as possible.

The idea is formed to expand Lüneburg Heath Nature Park.

“Verein Naturschutzpark” is founded and is responsible for Lüneburg Heath Nature Park, with the aim of promoting sustainable regional development in the area.

Lüneburg Heath Nature Park Region Association has actively worked on projects in particular to develop tourism in the Nature Park.