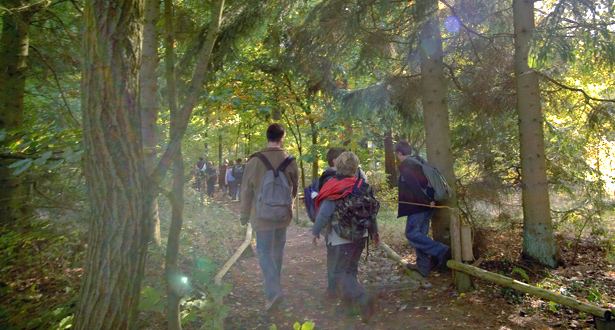 The forest in the Nature Park has once more claimed its place! Today about 35% of Lüneburg Heath Nature Park are forests which perform a variety of tasks.

On the one hand, they represent a significant economic factor through the production of the renewable raw material wood, and on the other they are also a habitat for many animal and plant species, an ecological compensation area and an important recreation area. 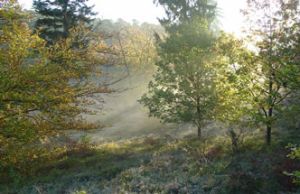 There was not always so much forest in the Nature Park Region. After the climate had improved following the Weichselian and Saale glaciations, birch and pine colonised first, followed by mixed oak forests and finally by beech forests. But then humans began to clear the forests and removed the nutrients in order to cultivate crops and rear cattle. In addition, there was a high demand for wood for iron-smelting during the Bronze Age. Larger and larger heathlands formed on the deforested land. Having been almost completely pushed back, in the 19th century, as heathland farming was gradually abandoned, the forest was given more space and reforestation began.

Today you can still find remnants of the historical ancient forests in Lüneburg Heath Nature Park. Wood pastures can still be found. Overall, coniferous forests dominate the Nature Park. The objective of today's forest management is the development of mixed forests. Thus, old pine stands are gradually transformed into multistage mixed forest by natural succession, but also through targeted rejuvenation. The concepts for sustainable forest planting and conversion must now also take into account the effects of climate Change. 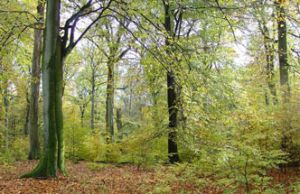 Do you know the emergency meeting points? Red and white signs have been placed in state forests. On each one there is a unique inscription consisting of the letter code of the responsible county and a specific number for the point. In order to guarantee quick rescue in an emergency, a forest visitor can call the emergency number "112" and tell the emergency personnel the emergency point number.

The fire brigade, police and ambulance service are familiar with the individual emergency meeting points and their access routes, so when given an emergency meeting point they can be there quickly. You can also download these meeting points as an app on your smartphone or GPS-enabled devices. Currently, the app is only available as an online version. For further information on this service, please contact the Forestry Administration of Lower Saxony.

What are wood pastures?

Wood pastures are forests which were used for grazing. Livestock, such as pigs and cattle, was driven into the forest, where it could feed on tree seeds and nuts, wild fruits, mushrooms, wild herbs as well as the shoots and buds of young trees. It is a very old form of land use. The word Hutung derives from animal husbandry, especially cattle. Wood pastures have been preserved in the Nature Park, e.g. at Wilsede.