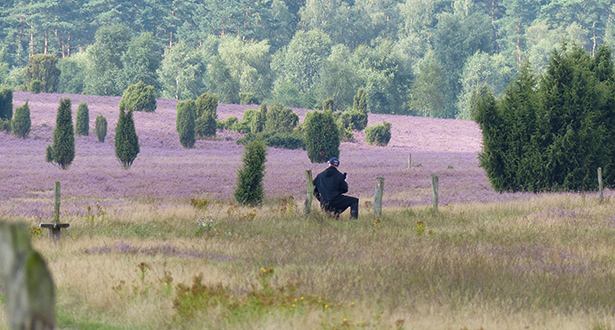 The 145-kilometre-long Hermann Billung Trail leads from Lauenburg to Verden, with a 60-km-stretch crossing Lüneburg Heath Nature Park. The route was named after Saxon nobleman Hermann Billung, who lived between 912 and 973. As a close confidant of King Otto I the Great, Billung represented him as his Deputy in the Duchy of Saxony. From Lüneburg the path leads through shady forests and over meadows to Amelinghausen, where the Heather Queen is chosen every year at the end of August. Continue over the 95 m high "Haselhop", from which a wide view over the Luhe valley opens up. A few kilometres before Bispingen the next stop is reached, you will pass by Bispingen Bird of Prey Enclosure, which offers a magnificent flying demonstration.

Plan some time in Bispingen to visit the 650-year-old "Olen Kerk", and then, following the upper reaches of the Luhe, you will pass the adventure playground to the source ponds of the Luhe. Through a large forest area, the trail now leads to the small heathland village of Stübeckshorn, which is the ancestral seat and birthplace of Hermann Billung. Continue further via Oeningen to Soltau. Here the thermal baths invite you to relax, and the Toy Museum is also worth a visit. Not far from Schäferhof Neuenkirchen, whilst crossing Riensheide, the hiking trail leaves Lüneburg Heath Nature Park in the part of Behningen which belongs to Neuenkirchen. You can follow the path further through Visselhövede to its end in Verden.